Too Much Technology Is A Workplace Distraction 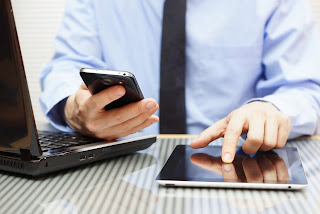 The results of a survey by Microsoft indicate that constant contact
with technology such as emails, messages and notifications in the workplace can reduce productivity, make workers less productive, and increase stress levels.

It’s All Down To The Company’s ‘Digital Culture’

The survey, which involved the opinions of 20,000 workers from 21 European nations, found that how technology is viewed and deployed in the workplace can make a big difference in worker productivity and well-being. Microsoft’s findings therefore, indicated that a company's chosen "digital culture" can improve workers' productivity and help them feel more involved in the business.

It will come as no surprise to many people reading this that too much exposure to and emphasis on technology (e.g. large amounts of updates and notifications arriving via social media during the day) makes people less productive and more distracted.

The Microsoft report makes the point that one of the reasons why only 11.4% of European workers said they felt highly productive at work may be that even though there is an abundance of technology around, that doesn't necessarily translate into impact.

Productivity comes from creative interchange rather than people simply working on computers, and Management Scientists now believe that technologies can overload people and make them less productive by making them focus too much on trying to deal with the technology itself, rather than working at using the technology to improve the delivery of a product or service.

Management Science experts now recognise the existence of 'technostress', which can occur when workers have to deal with the adverse consequences of adopting novel computer systems or software.

The main message for businesses is that simply introducing lots of interruptive and / or novel technology to the working environment can actually cause stress and make workers less productive. Businesses need to pay attention to building the right kind of digital culture. For example, organisations first need to know what they want to do with the software and systems they have adopted, and give staff the correct training and other help to use it.

A planned and managed digital culture with supporting conditions, such as appropriate email response times and measuring whether people are happy with the tech they use to do their day-to-day jobs, can help workers to get the most out of technology. This can lead to higher productivity, fewer staff feeling disengaged, and can ultimately benefit the aims and objectives of the business.
Posted by Unknown at 8:53 am