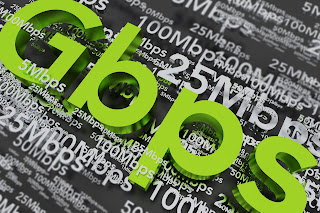 Broadband operator Hyperoptic is reported to have achieved home
Broadband speeds of up to 10 gigabits per second (Gbps) in a recent test.

‘Hyperoptic’ is the company name in this case, but the term hyperoptic generally refers to the kinds of super speeds that can be achieved with full fibre / fibre-to-the-building / fibre-to-the-home / 'fibre-to-the-premises' infrastructure and packages.

The result of the test, which was carried out in a home in the former Olympic village in east London (presumably because it is fully fibre linked), is thought to be the first time that such speeds have been brought to a UK home using an existing ISP network rather than a dedicated line.

How Fast Is That?

Quoted broadband speed figures are often not what they seem, but speeds of up 10 gigabits per second would mean that:

Why Do We Need Hyper Speeds?

Spending more time on more powerful gadgets / mobile devices, the growth of the subscription economy for services, the continued growth of online shopping, the growth of the cloud, the popularity of gaming, video and social media programs, the popularity of TV / Film and other media streaming services, the demand to download bigger and better quality files, and the frustration of buffering and slow connections over many years have all stimulated UK demand for better and faster connections. Also, more businesses are looking to future-proof their networks, and they feel that much faster connections are needed for effective global business competitiveness.

Back in September, the UK government announced that six regions of the UK would be hosting trials of full fibre broadband for businesses, schools and hospitals as part of a £200m scheme by the Department for Digital, Culture, Media & Sport (DCMS).

According to the DCMS, £10 million of the total £200 million budget will be spent on trials for full fibre broadband in Aberdeen and Aberdeenshire, West Sussex, Coventry and Warwickshire, Bristol and Bath & North East Somerset, West Yorkshire and Greater Manchester.

Despite this recent announcement by Hyperoptic, there are many valid criticisms about any big plans for boosting broadband speeds with the widespread use of fibre-optic cables in the UK including:


What Does This Mean For Your Business?

The test by Hyperoptic is really just a tantalizing view of what could be possible if we all had full-fibre broadband up to our premises, and a fabulous UK fibre infrastructure. Obviously, that could bring considerable value-adding, cost-saving, competitiveness-boosting benefits to UK businesses.

Sadly, the current reality is that businesses don’t have (and look unlikely to have any time soon) access to kind of speeds that overseas companies (e.g. competitors) enjoy, and certainly don’t have access to the speeds that the Hyperoptic test was demonstrating.

Whilst it is good that funding and momentum for the task of delivering faster (fibre or fibre/G.fast) broadband for UK businesses looks to be increasing, the UK has a long way to go, and the reality is that we may only actually have 7% full fibre coverage by 2020.

In terms of what it actually means for a business to be physically connected to a fibre broadband infrastructure, technical commentators say it will be a case of simply having a small box installed on the premises. In terms of costs, it seems likely that faster full-fibre packages will be an opportunity for ISPs to charge more.
Posted by Unknown at 11:30 am