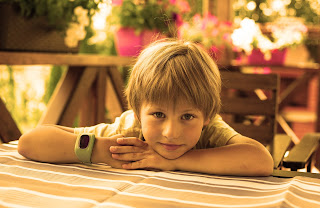 German Telecoms regulator the Federal Network Agency has banned the sale of smartwatches to children and asked parents to destroy any that they already have.

Danger To Children - Spying and Tracking

The reason why the regulator has taken the step is over concerns that children wearing the watches could be, in theory, spied upon and tracked. These risks have been identified because the watches are internet-connected and are thought to be poorly secured e.g. no encryption of any transmitted data. This could mean that they could be hacked and taken over, and also the GPS tracking in the watches could be used by unauthorised persons to track the child.

Smartwatches like the ones that have been banned in Germany are generally aimed at children aged between five and twelve, and this could be considered to be a demographic that is particularly vulnerable if data from the watches fell into the wrong hands.

Smartwatches have a Sim card, limited telephony function, and are linked to an app.
Parents can use the app to access their child’s smartwatch, and thereby listen to what is happening in the child’s environment, and it has been reported that the German Federal Network Agency has evidence that parents have used this feature to listen to teachers in the classroom. This ‘unauthorised transmitting’ and the surrounding privacy concerns have led to schools being warned to be on the lookout for the watches.

This is not the first time that concerns have been raised about the security and privacy aspects of smartwatches. Back in October, the Norwegian Consumer Council (NCC) reported that some children's watches had flaws such as transmitting and storing data without encryption. Among the dangers identified were concerns that watches could have been hacked using basic techniques and the (child) wearer could have been tracked, or made to appear to be in a different location.

Only last week there were news reports that Consumer watchdog Which? identified toys such as Connect, the i-Que robot, Cloudpets and Toy-fi Teddy as having a security vulnerability because no authentication is required, and they could be linked with via Bluetooth.

Also in the US, back in July this year, the FBI issued an urgent announcement describing the vulnerability of internet-connected toys to such risks, explaining steps to take to minimise the threat. The main concern appeared to be that young children could tell their toys private information, thinking they’re speaking in confidence. This information could be intercepted via the toy, thereby putting the child and family at risk.

Many tech and security commentators agree that a lot more care needs to be taken by manufacturers of Internet-connected / smart toys, gifts, and other home and business products to make sure that they are secure when they are sold, and that any information they do transmit is encrypted.

It is very worrying that, children particularly, may be at risk now due to vulnerabilities in smart toys. There have been many occasions in recent years when concerns about the security / privacy vulnerabilities in IoT / smart products have been publicly expressed and reported. The truth is that the extent of the current vulnerabilities are unknown because the devices are so widely distributed globally, and many organisations tend not to include them in risk assessments for devices, code, data, and infrastructure. Home / domestic users have no real way of ascertaining the risks that smart / IoT devices pose, probably until it’s too late.

It has also been noted by many commentators that not only is it difficult for businesses, including manufacturers of smart products, to ascertain whether all their hardware, software, and service partners are maintaining effective IoT security, but there is also still no universal, certifiable standard for IoT security.

For businesses, it’s a case of conducting an audit and risk assessment for known IoT devices that are used in the business. One basic security measure is to make sure that any default username and passwords in these devices are changed as soon as possible. For home users of smart products, who don’t run checks and audits, it appears that others (as in the case of the German Federal Network Agency) need to step in on their behalf and force the manufacturers to take security risks seriously.
Posted by Unknown at 1:00 pm