Apple is reported to be launching its “HomePod” Siri-controlled smart speaker in December this year, and although it’s in the same market as Amazon’s Echo and Sonos, the marketing message is that it’s more about music and sound quality.

Apple’s Siri is like Amazon’s Alexa. It is the intelligent, talking personal assistant voice control system that you can give commands to in natural language, and thereby operate and interact with your Apple iPhone, iPad, iPod Touch and now your HomePod.

The ‘Pod’ part of the name HomePod, and the fact that it is an intelligent speaker (with a focus on a special speaker arrangement) mean that it is very much focused on music and creating a good sound experience, rather than focusing too much on Siri and Siri’s ‘intelligence’. 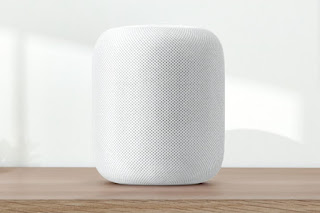 The HomePod is a circular pill-shaped device that is slightly wider and shorter than the Amazon Echo, and the outside is covered in a minimal-style mesh white or black material. This houses 7 tweeter and 1 custom woofer speakers, microphones, and an Apple 8 chip.

What’s So Good About It?

Although it may be tempting to assume that the HomePod is a slightly late to market ‘me-too’ version of other intelligent speakers, Apple is positioning it as a new and better way of experiencing home music.

The beam-forming array of speakers and microphones are reported to be able to intelligently adjust and tune themselves to the individual shape of a room by bouncing sounds off the walls. The result is reported to be the sensation that the sound fills the room, rather than obviously coming from an isolated speaker in the corner.

The sound from the HomePod is also reported to be bassier and beefier than the Amazon Echo. All this, combined with its multi-channel echo cancellation and real-time acoustic modelling mean that the HomePod can provide a better audio experience than other ‘smart speakers’.

The HomePod is optimised to be completely compatible with a user’s entire Apple music library, and one way in which the ‘intelligent’ aspect of the device interacts with this is in enabling you to ask it to play more songs of a certain type, or by telling it (and it learning) what songs you like.

With Apple’s AirPlay 2, multiple speakers can be also used around the home.

What About The ‘Smart’ Questions?

Although the device is very much focused on the music, you can ask the intelligent assistant Siri questions in a similar way to Amazon’s Alexa e.g. the news headlines and the weather. As critics have pointed out, however, this aspect of the device is not as good as Echo, and this may be the reason why Apple have chosen to position the device with a music and sound quality focus.

This story shows how the market for devices with an intelligent AI aspect to them is growing and how some highly sophisticated technology is now being incorporated into what are essentially household entertainment systems. Companies are now able to produce products and services that provide highly customised experiences that adapt intelligently and relate more closely than ever to our personal likes and needs. Rather than us having to take time to learn about complicated devices and how to work the many aspects of them to get what we want out of them, we are now being offered complicated devices that learn about and adapt to us.
Posted by Unknown at 2:04 pm